So What’s Different About LED Lighting?

So What’s Different About LED Lighting?

By enlightensolutions | Enlighten | Comments are Closed | | 0

Ever since the human race has discovered fire, it has been finding new ways to light the darkness.  For millennia, simply setting a stick or oil on fire was our source of light, a very inefficient one at that.  In 1879, Edison filed a patent for a light source that essentially heated a tungsten element to the point its red-hot glow emitted light. This was a huge leap in illuminance moving towns and homes away from highly pollutant oil burning.  However, the incandescent bulb was still not very efficient.

In the 1930’s technology finally began to take some steps towards efficiency when it developed fluorescent lights.  The approach here was to run an electric current through a tube filled with gases and produce light via the reaction caused.

More recently, light-emitting-diode (LED) technology has been commercialized.   An LED is a small electronic device with two halves too it: One side known as the N side for negative and one side known as the P side for positive.  When an electric voltage is applied to the two sides, electrons flow from the negative side to the positive side and, in the process of doing so, emit light.  No more lighting something on fire or performing an electrochemical reaction on gas.  Whether it be for a classic household light bulb or for a large highway light, these LED’s are now being arranged in a myriad of different configurations however best suited to their end application.

The efficacy of a light source is measured by the amount of brightness (measured in lumens) that can be produced for a given power use (watts).  Below shows the increases in efficacy lighting technologies have gained over time.  The higher the efficacy the less energy is needed to light a given application. 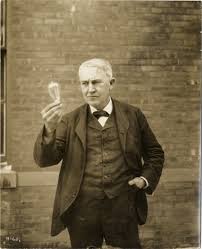