In this LED Mini Series installment, we will briefly review how LED is different than other other lighting technologies and how this translates to lower energy use.

Previous lighting technologies relied on several different methods to emit light: burning oil (old), heating an element (incandescent / 19th century), heating an element inside of a gas (halogen / early 20th century), ionizing a gas (fluorescent / mid 20th century). Recently in the 21st century, light-emitting-diode (LED) technology has been commercialized. An LED is a small electronic device with two halves too it: a negative side and a positive side. When a voltage is applied to the two sides, electrons flow from the negative side to the positive side and, in the course of doing so, emit light.

Producing light via an electronic process versus a chemical has proven to provide great increases in efficiency. The efficacy of a light source is measured by the amount of brightness (measured in lumens) that can be produced for a given power use (watts). The below table shows the average increases in efficacy lighting technologies have gained over time. The higher the efficacy the less energy is needed to light a given application.

What all this means, is that a well-designed, well-manufactured LED light can illuminate a space and require fair less energy to do so than any other lighting technology. A general rule of thumb is that converting to LED can reduce lighting power by approximately 30% to 85%. The more hours a lighting system runs, the more energy and dollar savings will be accumulated from this efficiency gain. Since lights in a business application can run many hours, LED’s superior efficiency can add up to significant electricity savings and translate to very appealing financial returns. (Visit Enlighten’s Past Project page to see real-world examples LED project returns.)

The following table provides some more examples of typical wattages found in older technologies and the equivalent wattages of common LED replacements. 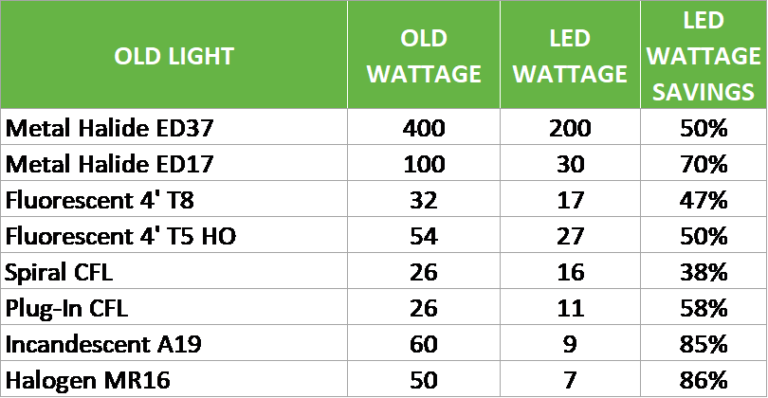 In upcoming LED Mini Series installments, we will review methods for totaling the electricity savings as well as the financial returns for a specific LED project. For information on this or any installment feel free to contact Enlighten directly: ledseries@enlightensolns.com / (313) 300-2843.