LED Mini Education Series: How to Determine Your Electricity Rate

LED Mini Education Series: How to Determine Your Electricity Rate

We saw in a previous LED Ed Series installment that the electricity rate factor is key to translating energy saved to dollars saved.  So how do we estimate this factor accurately? 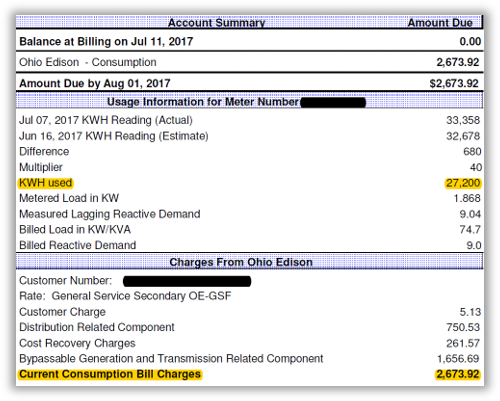 The simplest and generally most accurate way is to do a quick analysis of your building’s electricity bill.  The electricity rate is the total dollar amount of the bill divided by the total electricity use.  For example, if a bill’s total cost is $1,200 and its electric use is 10,000 kWh, the Electricity Rate would be $0.12/kWh.

Note for smaller electricity bills (less than $100 monthly), this method may lead to an overestimation of the electricity rate.  Simply exclude the fixed fees not related to the energy or demand use (e.g. meter fee, billing fee, customer charge, etcetera)  from the bill’s total charges.  Then follow the same method of dividing the remaining charges by the electricity use and a more accurate electricity rate should result.

Any firm submitting an LED savings proposal should be capable of performing an accurate analysis of the electricity bill to determine a building’s electric rate. The only thing they would need to be provided with do so is a copy the building’s electricity bill.   Some LED retrofitting companies will include a rate increase factor when totaling electric savings over several years.  This is fine so long as the annual increase percentage is small (1 -3%).  Anything larger is not realistic. Even though some utilities may be raising their rates by more than 3% in the upcoming years, very rarely do they do so for 5, 10, or 20 years straight.

If the electric bills aren’t available, another source may be the information the Department of Energy’s EIA publishes on electricity rates by state.   These rates are for the whole state and certain utilities within the state may be more or less that the averages published.  The EIA also puts out an average electricity rate information for many (but not all) electric utilities in the country.   Click here for a table on commercial and industrial rates by electric utility.